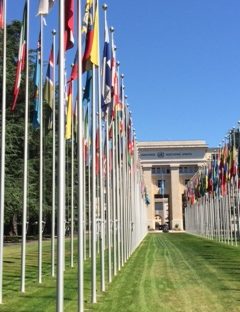 The UN’s Human Rights Committee wants to hear from NGOs (non-governmental organisations) about the state of civil and political rights in the UK including Scotland. The Committee is assessing UK, including Scotland’s, compliance with the International Covenant on Civil and Political Rights. In particular the Committee invites evidenced proposals from NGOs about what should be put in the ‘list of issues prior to reporting’ (LOIPR) ie what questions should be asked of the UK government before it submits its report to the UN. The questions can relate to devolved or reserved matters.

The LOIPR of UK is scheduled for adoption during the Committee’s next 2020 session – on 8th March. There is more information available from the UN at https://tbinternet.ohchr.org/_layouts/15/treatybodyexternal/SessionDetails1.aspx?SessionID=1371&Lang=en. The deadline for the NGO written contributions is 13 January 2020.

Once the UK LOIPR is adopted, the UK will be given a year to reply, The reply will be treated as the UK’s 8th periodic report and will be considered by the Committee in 2022 along with other submissions on the UK eg from NGOs and National Human Rights Institutions (NHRIs). Something to get involved in?

Looking ahead, organisations can explain to staff, volunteers and stakeholders, how human rights fit with their work internally and externally in a Blog published for International Human Rights Day which takes place on 10th December each year. Be ambitious on what you can do for rights holders as well as duty bearers over the coming year to build a human rights culture in Scotland.

Here are some Blogs we have written to make the connection between human rights delivery and everyday issues including:

Start off the process by asking colleagues what they need to know to make human rights real for them, the people they work with and the people they serve. Rights need to be practical and easily delivered if they are to make Scotland fairer.

The profile of human rights in decision making on strategy, policy, services and funding is now more visible in Scotland. The challenge remains to capture high level political commitments and apply them in local areas across everyday issues. The potential of human rights to deliver a fairer Scotland is being realised by more people and more organisations but increased action is needed – from volunteers and front line staff to those who govern and manage the public, third and private sectors. We all have a role in making human rights real and if you want to influence developments and roll out good practice, a good idea is to draw on reports with recommendations and be inspired by resources including:

Opportunities for Human Rights in Scotland

Towards the end of 2018, two major reports were published that should set the direction for the promotion, delivery and enforcement of human rights in Scotland over the next decade. 40 recommendations were made in ‘Human Rights and the Scottish Parliament’ published by the Equalities and Human Rights Committee and seven in ‘Recommendations for a new human rights framework to improve people’s lives’, published by the First Minister’s Advisory Group on Human Rights Leadership.

The conclusions from both reports mean the current attitude of ‘business as usual’ on compliance with human rights law is no longer tenable. Something has to happen although both reports realise that building knowledge and capacity are the key, first steps to enabling informed and progressive change.

How duty bearers and rights holders respond across Scotland will determine the nature and pace of reform. Both share an interest in ensuring that human rights now explicitly inform the design, delivery and funding of public services and services of a public nature.

So what are the key points? Too many for this Blog but:

As we go forward, rather than staying still or reversing what progress has been made on human rights, let’s hope in 2019 we can each see signs that human rights are more visible for those who use and work in services funded by the public purse.

Take the time to think about human rights and how they impact on you as a human being, and also in your role at work whether you are employed in the public, Third or private sectors.

Human rights very often get a bad reputation for being too complex, irrelevant to the lives of ordinary people and of little practical use.  In Scotland there is certainly a gap between high level political commitments and people’s day to day experiences.  Fortunately there are several positive developments that create opportunities for civil society and the public sector to mainstream human rights across devolved functions in Scotland including health, housing and education.

Visit the Committee page to learn more about the progress of its Inquiry http://www.parliament.scot/parliamentarybusiness/CurrentCommittees/Equalities-Committee.aspx

Another development to monitor for impact is the introduction of the social and economic duty which has been re-branded as the ‘Fairer Scotland Duty’.  The interim Guidance was published on 27th March 2018, becomes effective in April 2018 and covers a 3 year implementation phase. It places a legal responsibility on particular public bodies in Scotland to actively consider (pay due regard to) how they can reduce inequalities of outcome caused by socioeconomic disadvantage.   Its implementation will be monitored and regulated by the Equality and Human Rights Commission (EHRC).    Visit the Scottish Government website to learn more about the Duty http://www.gov.scot/Resource/0053/00533417.pdf